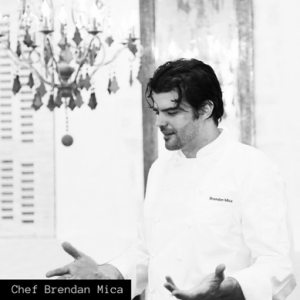 An in-depth look at the life of the Toluca Lake restaurant’s talented executive chef.

LOS ANGELES, CA, UNITED STATES, December 19, 2018 /EINPresswire.com/ — Q: Hello Brendan, it’s a pleasure to speak with you today. Mind telling me where were you born?
A: Not at all. I was born in Southern California. Culver City.

Q: So, when did you first become interested in the art of cooking?
A: It stemmed from my interest in eating, actually. I also travelled a lot as a child and got to try out many different types of foods. My father worked for an airline, so I travelled internationally quite a bit.

Q: Where did you begin your cooking journey?
A: I originally cooked for my family and did some bartending until I was 20, and then I went to the California School of Culinary Arts.

Q: While you were there, was there a specific type of cooking that fascinated you?
A: I just wanted an overall education in the art of cooking, and to learn as much as I could.

Q: What was the most surprising part of learning formal cooking for you?
A: I learned that less-processed food actually takes more work and discipline. I was very surprised to hear that.

Q: With the pressure of running a large kitchen, it can be possible to let things slip every once in a while. How do you stay concerned about quality?
A: Maintaining quality has always been my priority as a chef, no matter the circumstances. It’s something I’ve always carefully worked on in my career.

Q: After school, where did you go next? What was the next step in progressing your career?
A: While I was going to school, I actually did some cooking at the Lowe’s in Beverly Hills. That way I could get on-the-job experience while still being in class.

Q: I’m seeing that you were in Spain for a while. What did you do there?
A: I was a private chef for a Sony executive, who is actually a family friend. I was there for 6 months, during which I cooked private meals and catered.

Q: How did you ultimately end up at your current job?
A: After Spain I went to Germany, where I worked at a French-German restaurant. I came back to the United States and opened up my own restaurant in California. It started out great, but then it got an identity crisis because it didn’t know if it wanted to be a night club or restaurant.

Q: That does sound unfortunate, but it’s great to see that things are going great for you now. Did any mentors help you along the way? How important is a mentor in becoming a great chef?
A: Extremely important. They are the people that keep you driving and grounded. They constantly push you. It’s one of the few reasons you work harder all the time, not because you want to impress them, but because it gives you something to strive towards.

Q: Finally, what is it you hope to achieve in your current work?
A: I feel like this is the first time I’ve been able to do my type of cuisine, my type of menu. I’ve always accommodated a type of cuisine, but now I can choose the food I want for the space. I’m excited to work at the Santuari Restaurant, and I only see good things coming to this venue in the near future.