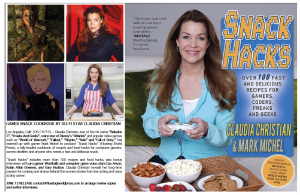 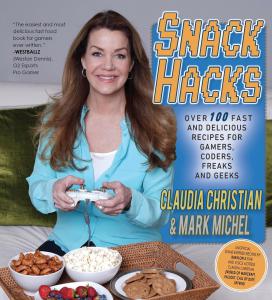 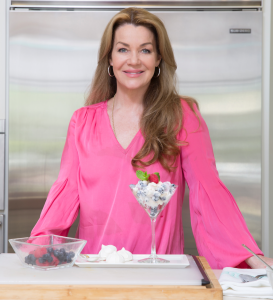 I've created fast, simple and delicious recipes and cooking hacks designed to satisfy your taste buds and silence your raging appetite so you can focus on what's really important — gaming!”
— Claudia Christian

LOS ANGELES, CALIFORNIA, USA, June 20, 2019 /EINPresswire.com/ — Claudia Christian, star of the hit series "Babylon 5", "Freaks And Geeks", voice star of Disney's "Atlantis" and popular video games such as "World of Warcraft," "Fallout," "Skyrim," "Halo" and "Call of Duty," has teamed up with gamer Mark Michel to produce "Snack Hacks" (Floating World Press), a fully-loaded cookbook of recipes and food hacks for computer gamers, screen dwellers and anyone who needs a fast and delicious snack.

To Eat or Play? Video Game Voice Star has the food hacks!

Co-author Mark Michel details how his gaming experience, cooking ability, and ingenious life hacks help him deal with the limitations of his cerebral palsy.

Recipes include meals for one, to keep sole gamers fueled-up and ready for action; snacks and appetizers for your weekend gaming session with friends; and entrées and desserts to take your parties to the next level. Threaded throughout are Hack Attacks — tricks to make your time in the kitchen quicker and easier — and In Game Downloads — tips to make the recipes your own.

"I've created fast, simple and delicious recipes and cooking hacks designed to satisfy your taste buds and silence your raging appetite so you can focus on what's really important — gaming!" said Claudia Christian.

"Snack Hacks," by Claudia Christian and Mark Michel, will be released on June 12 and is now available for pre-order ($29.99 hardcover) via all book vendors and on Amazon

"The easiest and most delicious fast food book for gamers ever written."
— Westballz (Weston Dennis), pro gamer with G2 Esports

"Delicious and hilarious. I'm writing this with a mouthful of Turner and Landau caramel!"
— Elias Toufexis, voice actor on "Fortnite," "Fallout 4," "Far Cry"

“Claudia’s book is going to turn me into a well fed gamer!” Not only are the stories great but after a hard game that she voices, I can’t think of anything better than a Christian hack snack!!!” – Joanna Cassidy actress (Blade Runner)

Available on request: PDF press release, an image of the front and back covers of "Snack Hacks," a video flip-through of the book, and a headshot of Claudia Christian, sample pages and images from book.

For media only: contact Catherine at contact@floatingworldpress.com for a comprehensive media pack.

In addition to her career in film and television Claudia Christian is an accomplished author and has previously published her addiction memoir "Babylon Confidential" with BenBella Books and the science fiction novel "Wolf's Empire" through Macmillan's Tor Books imprint. She has over a 250,000+ followers on social media.

Facebook: The video flip-through of the "Snack Hacks" book can also be found and shared via the Claudia Christian facebook fan page