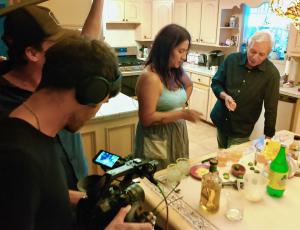 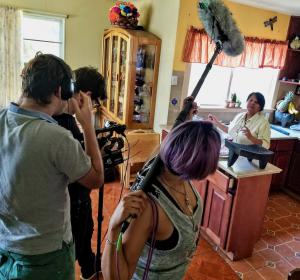 “Texas Mexican Food Stories” shoot in San Antonio, Texas. Rosalia Vargas demonstrates how to use the metate, a traditional mortar. She is a member of the Tap Pilam, Native American community.

What you eat tells who you are”
— Adán Medrano

HOUSTON, TEXAS , USA, January 20, 2020 /EINPresswire.com/ — "Texas Mexican Food Stories" is a 75-minute documentary feature film that was shot totally in Texas and is in the final editing stage. "It's not a cooking show," says Adán Medrano, executive producer and author of two books about the history and the recipes of indigenous Texas Mexican cooking. "It's a road movie of discovery," Medrano continues, saying that the major voices in the film are of Mexican American women home cooks and restaurateurs. He says that they've been the leaders in developing and sustaining culinary traditions.

The producer of the documentary feature is Virginia Díaz, a Houston-based filmmaker who is originally from San Antonio and who grew up with this food. With location manager credits in feature films like "Selena" and "Rushmore," Díaz brings a strong vision to the production. She explains that the role of women has been erased from textbooks, newspapers, magazines and media in general. However, history tells us that "comida casera," home cooking of Mexican American women, holds the culinary tradition that begins 15,000 years ago when indigenous people first stepped on Texas soil, she says.

Although the film is under wraps during this final editing phase, Medrano will screen a five-minute sneak preview at the Texas Historical Commission's annual conference in Austin on January 29. Medrano is the opening night keynote speaker at the conference. "Our story is a universal story," says Medrano, explaining that it's all about the idea that "what you eat tells who you are."

The director of the film is Anibal Capoano from Uruguay whose most recent documentary, "Caballitos De Lata/Tin Horses," premiered in Houston four years ago. The production team is a Texas-Latin America collaboration. Capoano says that the Texas Mexican food story is one that resonates with indigenous communities across the Latin American continent. The director of photography is award-winning cinematographer, Gabriel Bendahan, also from Uruguay.

The production team shot 22 hours of footage in Texas cities including Houston, San Antonio, Corpus Christi, Harlingen, McAllen and aboard a small boat on the waters of the Rio Grande.

Díaz says that the film engages cooks, scholars, artists and activists as each tells how food shapes who they are. Foregrounding the leadership of Mexican American women, the scenes of cooking, baking, singing, feasting and barbecuing, all show that food is key in the formation of identity and the strengthening of community.

The film has received production funds from The Idea Fund, a program of The Andy Warhol Foundation for Visual Arts, and from the National Association of Latino Arts and Cultures (NALAC).

A film "Go Fund Me" campaign has been created to bring in wide grassroots support for the final edit and for distribution directly to universities, colleges and community centers.