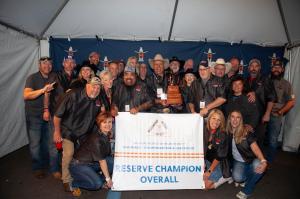 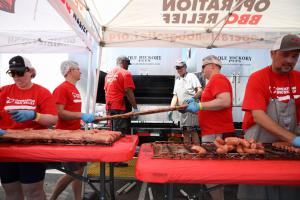 Operation BBQ Relief is a team of champion BBQ pitmasters and volunteers that have the bandwidth to feed the masses following natural disasters.

“We monitored the tornado in Nashville and immediately called our leadership team together to begin plans for deployment. We have always had a passion and love for the craft of BBQ, but it’s not just about food. It’s about what a meal can do for people in their time of need. BBQ is comfort food that provides hope and compassion during the most difficult time,” says Stan Hays, Co-Founder and CEO, Operation BBQ Relief.

Operation BBQ Relief was established in 2011, following a destructive tornado in Joplin, MO. Since then, the organization has deployed to disasters including Hurricane Michael in the panhandle of Florida, Hurricane Florence in Wilmington, North Carolina, Hurricane Harvey in Houston and most recently Hurricane Dorian in the Bahamas. Through deployments in 60 disaster-stricken communities and 26 different states across the country, Operation BBQ Relief has served 3 million meals, with the help of more than 14,000 volunteers.

About Operation BBQ Relief
Operation BBQ Relief is a 501(c)(3) nonprofit organization that was founded in May 2011 in response to a need for tornado relief efforts in Joplin, MO. Competitive pitmasters from eight different states answered the call to feed displaced families and first responders. Together, they were able to serve over 120,000 meals in a thirteen-day period. This experience of building a network to feed individuals in need has been the inspiration for Operation BBQ Relief. To date, Operation BBQ Relief has provided over 3 million meals throughout the United States and internationally following natural disasters and through The Always Serving Project, benefiting the homeless, first responders, veterans, and service men and women.
For more information, visit www.obr.org or follow on Twitter, Facebook and Instagram @opbbqrelief