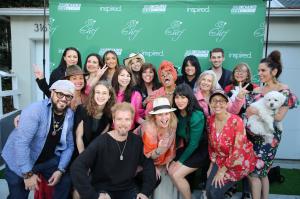 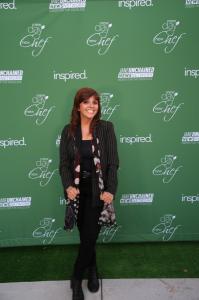 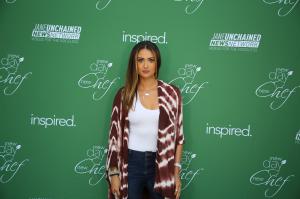 Model and Producer Katie Cleary on the Green Carpet! 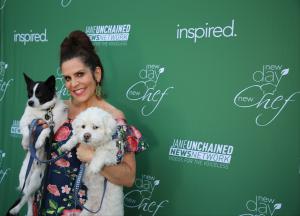 Spongebob Actress Lori Alan Poses with her Two Rescue Dogs at the Party! 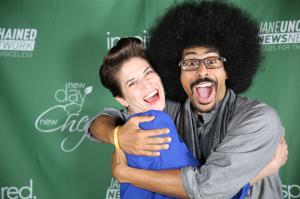 "New Day New Chef proves chefs have tons of fun in the kitchen when they cook plant-based! The food is delicious, good for us and the planet. It's a new day! You, too, can be a new chef! Check it out!”
— Jane Velez-Mitchell, Host of New Day New Chef on Amazon Prime Video

A fabulous party in the Hollywood Hills celebrated the launch of a new TV series now streaming on Amazon Prime Video! New Day New Chef is a fast-paced, 100% plant-based cooking show that's free for Amazon Prime members! And, it's set to air on Public Television stations around the nation this spring.

From the Golden Globes to Dunkin’ Donuts, from Burger King to Starbucks, the world is waking up to the benefits of a plant-based diet, for the climate, human health and the animals. Now, the skyrocketing trend toward plant-based eating is hitting television with this first-of-its-kind vegan cooking show!

New Day New Chef is hosted by New York Times bestselling author and former CNN Headline News (HLN) host Jane Velez-Mitchell, who is well-known for advocating a vegan lifestyle. Season one features eight episodes of fun, delicious, easy vegan recipes, such as a tantalizing tower of triple-decker veggie burgers and a Superwoman bowl of well massaged kale. Love eggs? We show you how to make eggless, zero-cholesterol, deviled eggs that will be a hit at any party!

“In this New Day of climate and health consciousness, anyone can be a New Chef, and we’ll show you how,” said Eamonn McCrystal, multi-Emmy Award winner and Executive Producer of New Day New Chef. “There’s a new appetite for plant-based food, and we’re serving recipes and information to a large, curious community of foodies and home cooks who want to put their ethics on their plate.”

Special guests include some of America’s best-known vegans, including:

For more information on the guests and the recipes, please visit newdaynewchef.com.

New Day New Chef is produced by Inspired in conjunction with JaneUnChained News, a 501c-3 non-profit. The show is now available to stream on Amazon Prime Video, and on Public TV Stations throughout the U.S. from this Spring (check local listings).

In addition to CNN Headline News (HLN), host Velez-Mitchell’s television chops include the nationally syndicated Warner Brothers/Telepictures show Celebrity Justice, and local Emmy-winning stints at KCAL-TV in Los Angeles and WCBS-TV in New York. Jane was also honored by Los Angeles LGBT Pride as Person of the Year 2010. She is the author of four books including the bestselling memoir, iWant: My Journey from Addiction and Overconsumption to a Simpler, Honest Life and founder and chief content editor of JaneUnChained News, a multi-platform social media news outlet.