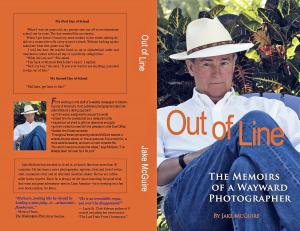 Out of Line • The Adventures of a Wayward Photographer

When Writer Pitched the Movie Rights to His Colorful New Memoirs, He Was Contacted by, Not Only One, but by THREE George Clooneys… A Head-spinning Tale!

ARLINGTON, VA, USA, May 20, 2020 /EINPresswire.com/ — Jake McGuire, a Washington, D.C. photographer and writer, who is finishing up his colorful memoirs entitled, “Out of Line • The Adventures of a Wayward Photographer,” has spent his lifetime on eye-opening adventures in more than 30 countries. His mantra of ‘thinking big’ and ‘being daring’ has landed him, amongst other feats, an invitation to visit with a President of the United States in the Oval Office, as well as a ‘morning tea’ invitation to join the Amir of Bahrain in his Royal Palace, whereupon McGuire was showered with gifts of diamonds and gold before he left the Oil Sheikhdom.

“My memoirs are by a photographer, about a photographer, so they are extremely visual,” he says, “so I figure they would easily tranlate into a colorful motion picture.”

McGuire, who is no stranger to “Out of Line” techniques as his book title says, thought he’d go big and pitch his book to Hollywood. He got the idea from his sister in North Carolina who said, “I’ll pray to the Patron Saint of Movie Rights!” They both laughed, remembering their childhood school days where the nuns had a Patron Saint for everything and everyone.

“I gave it a thought,” he says, “how about George Clooney, he'd make a great Patron Saint!"

“When my initial pitch to Clooney went out on the EIN, PR Newswire, it got a lot of media play,” he says, “but I never really expected to hear from George Clooney. So when I heard from three of them all claiming THEY were George Clooney, my head spun around in a 360 like the girl in "The Exorcist."

First, a little background on McGuire’s “Out of Line” memoirs: From working on the staff of a weekly newspaper to becoming one of America’s most published photographers, McGuire’s book reveals how he ditched his disheveled looks, switched to dapper, acted daring, and then watched his life blossom into a Hollywoodesque series of fun-loving, mischief-making adventures.

McGuire has been a newspaper photographer, photo editor, reporter, food and travel writer, chef, restaurant critic, and an admitted mischief-maker. He now has ten coffee-table books in print. He is always on the move searching for good food, fine wine, and delicious adventures all woven together.

Nowadays with the Corona quarantine, McGuire keeps busy writing, but he loves cooking, too. “Last night between writing pages on a ‘almost-didn’t-come-back-alive’ chapter of adventures in Colombia,” says McGuire, “I was busy cooking a South American inspired, Choripan with a home-made Chimichuri Sauce.” His travels in the Latin World has inspired him to start yet another whirl-wind book, aptly called, "No Moss."

McGuire’s calls from the three Clooney's came interspersed with him receiving his usual dozens of daily robo-calls, junk call, sales calls, and possible prank calls––of which, while he is promoting his book––he is hesitant to ignore, THE BIG ONE.

“I’m hopeful the real Clooney might want to take my book off the movie market place before someone else does,” says McGuire, “and, Clooney has that terrific twinkle in his eye to produce, direct and star in a fast paced film about an, ‘Out of Line,’ character.”

Clooney phone caller number one was fairly convincing, he says, but turned out to be an old schoolmate, “who was just messing with me.”

“In a movie, Clooney would make a better me, than me,” says the wayward McGuire with a chuckle. “And, I don’t mind having a bit part in it, where I’m sitting next to Clooney at a venerable old DC bar like the Old Ebbitt Grill.”

"Clooney caller number two, sounded like a gentleman from Mumbia,” says McGuire, who was about to hang up on the fellow, “But what if he was a film producer from Bollywood?” McGuire didn’t want to miss an opportunity so he listened for a while, but eventually said good-by when the pitch for yoga classes with Oprah came along.

"Clooney number three had a Russian accent," says McGuire, who once had a Russian girlfriend. "But I had to say goodbye to the girlfriend when, after a few glasses of wine, she looked at me and hinted, she'd be better off if her husband was dead. As I told my friends, I didn't go to law school but I understand what constitutes 'conspiracy to commit murder'." (Yet, another wild chapter in McGuire's book!) "With the man's Russian accent I was sure it wasn't the real George Clooney, so I hung up on him."

On second thought, McGuire now wonders if Clooney number three wasn't the real Clooney, clowning around with a theatrically savvy Slavic accent. "Oh well, there goes my movie down the drain, boo hoo!"

In addition to his adventures of chumming it up with heads of state, another sky-high–literally– chapter opens with, “if you have a fear of flying, skip this chapter or call your therapist, NOW.” It describes with nail-biting drama how he managed to get into the cockpit of a fully loaded commercial flight and casually flew it part way from DCA to ATL. “If the passengers knew I was flying it,” says McGuire, “they would have said, ‘Let’s Roll’ and would have stormed the cockpit.”

And, he had no pilot’s license. Now, with having to hang up on the final imposter, McGuire has no Clooney.

Washington Post writer, Monica Hesse, who penned a lengthy feature on McGuire in August of 2010, wrote, “McGuire is looking like he should be holding a mint julep, or yachting or doing something else genteel. His face is aristocratic… his manner is intense.”