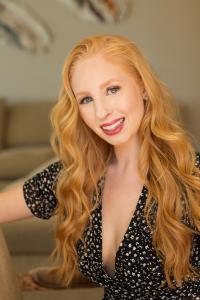 LOS ANGELES, CA, UNITED STATES, November 6, 2020 /EINPresswire.com/ — Elizabeth Stanton may be young, but when it comes to TV hosting, she is already a veteran. Ever since she was a teenager, she has been in the industry and she's already established an impressive track record. She's just getting started in a lot of ways, though. She was best known for hosting the Elizabeth Stanton's Great Big World from 2011 to 2018 and had the opportunity to travel the world and exchange perspectives on various cultures and traditions. Now, as the host of the new CW program, World's Funniest Animals, she is back on TV. The keys to her success have proved to be her vibrant personality and strong camera presence.

Check out the top 7 Facts about Elizabeth Stanton:

1. She is recently engaged. Elizabeth is used to her professional life being in the spotlight, but lately it's her personal life that has been getting all the publicity. Elizabeth and her longtime husband, Jacob Mayberry, announced in September 2020 that they had become engaged in France.

2. She loves giving back to the community. Giving back to those in need has been Elizabeth's top priority since the beginning of her career. In order to help provide toys for underprivileged children, she partnered with the Marine Toys for Tots Foundation. She also helped feed the homeless and frontline healthcare workers by partnering with Buca De Beppo.

3. She is an animal lover. A person hosting a show called "The World’s Funniest Animals" should obviously be an animal lover, right? Right! The good news is, that’s exactly who Elizabeth is. She loves animals and has an extra special place in heart for her two fur babies, Hank and Ruby who also join her on the show as she watches video clips of other animals.

5. She didn't always plan on being in the entertainment industry. A career in the entertainment industry was not something she grew up wanting, although Elizabeth was always interested in traveling. "I was never really involved in show until I traveled to Africa," she told Teens Wanna Know. "I wanted to bring a visual back to kids to show them what’s really going on in the world.”

6. She enjoys remaining active. Elizabeth loves to remain healthy as much as she can, considering the health challenges she's had that have often stopped her from doing as much as she would like. Elizabeth is the kind of person who is always up for an adventure, whether that's jet setting around the world, learning something new, or going to the gym.

7. She loves to cook healthy, balanced meals. Elizabeth has in Instagram accounted, @not_MarthaStuart, where she gives cooking advice and loves to showcase homemade recipes that are healthy. She proves to others that she is a very talented chef.

Elizabeth Stanton has been a world traveler her entire life, experiencing the culture of Europe, the wonders of the Far East, and the natural beauty of remote destinations. She started hosting “Elizabeth Stanton’s Great Big World” at the age of 15, and it was watched in 90% of the United States at its peak and is the top-rated show on FOX affiliates nationwide. In the show, she travels the globe with her celebrity friends exploring other cultures, learning about history, and finding opportunities to help those in need, while shedding some light on what others less fortunate are dealing with. The show featured stars like Bailee Madison, Jake T. Austin, Gregg Sulkin, and Garrett Clayton, and filmed in places all over the world, from the USA to Nicaragua to Paris to Beijing. She continues to film new episodes of Great Big World, which has been running for nine years and this is now the 10th year in which it continues to remain strong.

Elizabeth is very passionate about giving back and is a supporter of Marines Toys for Tots Foundation, donating thousands of toys to the organization over the last few years. In addition, she has donated money earned from her show to the homeless men, women, and children of Los Angeles, ultimately helping to feed over 4000 families in Los Angeles for two months. Earlier this year, Elizabeth teamed with Buca Di Beppo to distribute 10,000 meals between Los Angeles and New York to healthcare frontline workers during the COVID-19 pandemic.