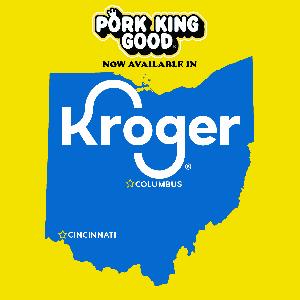 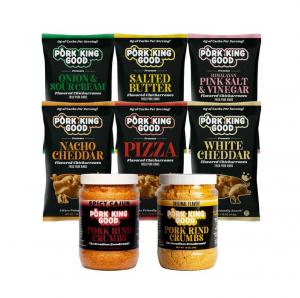 Since their launch in 2017, Pork King Good’s small team has been working extremely hard around the clock to compete against much larger brands in the pork rind market (which has historically been a male-dominated industry). Owner, Lauren Koston, states that “We couldn’t be more honored and humbled by the fact that a respected industry leader in grocery like Kroger has placed value in the entrepreneurship and true hustle that has gone into growing our small business and has allowed us this opportunity to work with them.” This expansion into Kroger is a huge milestone for the company, whose focus has shifted from B2C eCommerce to growing their physical retail presence, based on customer demand for nationwide availability of their products.

Lauren, who started the company after maintaining a 100 lb weight loss on a low carb, ketogenic diet, ultimately just wanted to expand on the lack of available low carb snack and cooking options in the market. The company has certainly achieved that thus far, with nine fun and innovative flavors of clean label, 0 carb fried chicharrones in their lineup along with their best selling Pork Rind Crumbs, a zero carb “breadless breadcrumb” alternative that has taken the keto, paleo, gluten free, and diabetic communities by storm. The brand has humorously been dubbed, the “Ben & Jerry’s of Pork Rinds”.

“We’re honestly just making the foods that we want to eat ourselves and sharing them with the world,” says Lauren. This strategy, along with personal familiarity with their own audience, has most definitely been paying off as Pork King Good has amassed a fanatically loyal and large following of customers who not only obsess over each new product release, but also adore the entertaining personality behind the brand. With a whopping 55k Instagram followers and countless social media product and recipe shares, the company’s organic growth has been tremendous.

Pork King Good’s exciting launch into Kroger certainly proves that the brand doesn’t plan on going anywhere anytime soon. The company in fact has some exciting and first-of-their kind projects in the works for 2021 that are sure to shake up the industry.