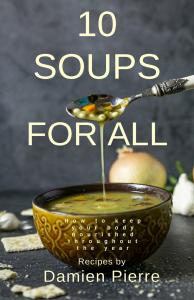 “The great thing about this new book is that it features international soups and shows that every culture has a great soup or stew,” said Pierre, who is also the creator of Dami’s Famous BBQ Sauce, Dami’s Famous Foods, Dami’s Kitchen and Bachelor Cook TV.

The book includes recipes for such soups as Caribbean Cowheel Soup, Minestrone Soup, and many more. All the soups are quick and easy to make and also taste delicious.

“With people spending more time cooking at home having the same old, same old’ week after week can get tiring,” Pierre said. “The recipes in this book allow home chefs to change things up and create quick, delicious meals that their families will love.”

Soup is delicious and also healthy! In particular, soups can be a great way to ensure a person and their family get their daily quota of health-boosting veggies

Soup can be both inexpensive and easy to prepare – home chefs can even use a slow cooker to make preparing the meal even easier!

Soup is great for advanced meal preparation. For example, a person could cook a soup on the weekend, freeze it and have it later in the week for lunch or dinner

Soup is a great way to stay hydrated. Since a soup is mainly liquid it can make up for someone not drinking as much water or other liquid as they should during the day

Plus, soup can be great for the immune system! And we all know how important it is to maintain a strong immune system in today’s world. Soups are often filled with valuable vegetables and other ingredients that strengthen the immune system and help people fight off the cold or flu.

Studies have even shown that Chicken Soup, particularly a version that is loaded with fresh garlic, celery, carrots, and onions, can help prevent the common cold.

“10 Soups for All” is available at Amazon and other book-selling platforms like Apple, Barnes, And Noble (Nook), and Kobo. The book is also being made available to grocery stores that want to provide their customers with a valuable resource that can make mealtime easier and more fun.

Grocery stores, as well as retail merchandising companies, looking to offer this book, should call 800-874-2660 or email info@damien-pierre.com.

The release of “10 Soups for All” or “10 Sopas Para Todos” is one of many exciting events happening at Dami’s Famous Foods. The company is introducing a new delivery service for those at home during the pandemic – damisfoodsdelivery.com. It is also going to be revealing a new product and BBQ book.

About his new soup cookbook, Pierre says: “Often, when people think of soup, they think of a hot, steamy dish only to be consumed when you are under the weather or if it’s cold outside. But the truth is soup is nourishing anytime and has restored my energy on numerous occasions throughout life.”

“Growing up, a hearty soup was a staple in our household,” Pierre said. “My family encouraged and exposed me to many different foods from a variety of cultures, and I learned that each has a specialty soup or stew for which they are known.”

Pierre created this new book to provide readers with inspiration, ideas, and encouragement that will allow them to create meals they and their families will love.

About Damien Pierre
Damien Bernard Pierre began cooking at an early age for his family, and through doing so he educated himself on how to prepare many different cultural cuisines which developed his passion and love for food. Damien credits his Caribbean roots as the reason he cooks with a fusion twist.