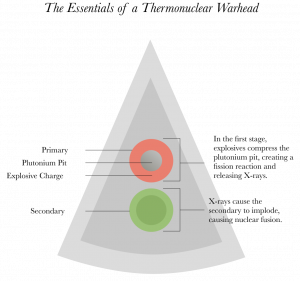 Cross section of a nuclear warhead, with plutonium “pit,” by SCELP. In the nuclear explosion the speherical pit undergoes compression by high exploses, triggering a fission reaction that sets off the weapon’s secondary.

WHAT: Public interest groups will hold a press conference for a major announcement of a forthcoming legal action as the U.S. Department of Energy and the National Nuclear Security Administration forge ahead with plans to drastically expand production of plutonium pits, the cores of nuclear weapons, at the Savannah River Site (SRS) in South Carolina and the Los Alamos National Lab (LANL) in New Mexico, with Lawrence Livermore National Lab (LLNL) in California engaged in pit design.

The legal action follows previous unanswered requests from the groups to DOE and NNSA as seen in correspondence in February and April.
‍
WHO:‍

HOW: The press conference will be live streamed on the South Carolina Environmental Law Project’s Facebook page starting at noon ET on June 29, 2021 at https://www.facebook.com/scelp.org/

The first plutonium pits would be for the new W87-1 warhead for the controversial new ICBM called the Ground Based Strategic Deterrent (GBSD), which has been proposed by the Department of Defense to replace the silo-based Minuteman III nuclear-tipped missile. While DOE's mandate is to produce 80 pits per year by 2030, the proposed SRS Plutonium Bomb Plant (PBP), with a goal to produce 50 or more pits per year by 2030, has already slipped significantly behind schedule. Charles Verdon, acting NNSA administrator, recently revealed to Congress that the SRS pit facility could be as late as 2035, which will have serious negative impacts on the viability of the project.

The PBP project appears to be following in the steps of the SRS plutonium fuel (MOX) debacle, which fell far behind schedule and faced massive cost escalations, resulting in $8 billion wasted before the project was officially scrapped in 2018. For parochial political reasons, to fill the funding hole caused by termination of the MOX project, DOE presented the rushed proposal to expand pit production to SRS. The site has no experience with pit production, which will present a daunting technical challenge to the project and result in more cost increases and schedule delays.

The Los Alamos National Lab has struggled in handling plutonium and failed to produce the 20 pits per year assigned to the site after the closure of the contaminated Rocky Flats pit-production site in Colorado, raided by the FBI in 1989 and formally closed in 1992. Cost overruns and schedule delays are also expected at LANL and reaching a production level of 30 pits per year by 2026 is doubtful.

Speakers at the news conference will review the legal and environmental challenges facing expanded pit production, including impacts at various DOE sites and lack of proper Environmental Justice consideration. Additionally, the need for new pits for new nuclear warheads will be questioned at this time when new nuclear arms reductions must be pursued.
‍