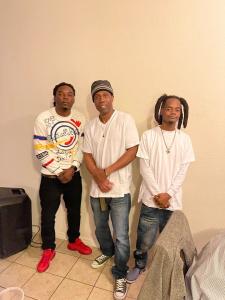 "Black Tears" is a deeply moving story about young black men who face law enforcement and may never see their families again.

OCALA, FL, UNITED STATES, June 25, 2021 /EINPresswire.com/ — It's been almost two months since the last StreetSmartz101 video drop, and they're back again with another fantastic video. The last time we saw these three was in April with "Queen's Anthem," the powerful hip-hop anthem that celebrates women everywhere and the women in our lives. Hot off the heels of their killer singles "Tray Stay Open" and "That's My Dog," StreetSmartz101 have no intentions of slowing down. These Central Floridians, along with their very own label Zero18 Global, are shaking up the music scene and making it their own. They're devoted to building their brand and making sure they're a force to be reckoned with.

"Black Tears," StreetSmartz101's latest single, is an emotional, soulful hip hop track that's sure to leave listeners feeling moved. StreetSmartz101 are known for their huge hooks and attention-grabbing bars and with "Black Tears" it's no different. This song is the perfect marriage of intelligent, quick-witted hip hop and rich soul music. The rapping in the verses acts like a fast-paced but smooth transition into that vulnerable soul sound. Like "Queen's Anthem," "Black Tears" really makes you stop and pay attention to what they're saying. It's a deeply moving story about young black men who face law enforcement and may never see their families again. "Watch out for cops," StreetSmartz101 warn the listener, citing the tragic deaths of Trayvon Martin and George Floyd – and how that's made them paranoid for their own lives and safety. But that fear can't be avoided – not for a son and not for a mother. Listen carefully, and you can feel a mother's pain at the thought of losing her son.

The video for "Black Tears" is the perfect visual for this single. The video starts strong with a woman standing in front of the camera as she pleads for the black kings to listen and stop being selfish with their reckless behavior – "These streets don't love you," she pleads, "They don't love nobody. They're definitely not gonna love you like your momma's gonna." She firmly asks the viewers to think about the pain they're inflicting on the people around them when they want to go out and risk their freedom. From there, the music kicks in, and the guys of StreetSmartz101 come into frame. We're invited into the home of a single mother and her son. We watch as he walks out of the house, and all eyes fall on him and his next moves. As the video continues, the mom flips through photo albums as her son fades away into the background. The video ends with StreetSmartz101 all dressed in white as the young man walks down the street towards the horizon. It's an ominous video that's sure to leave an impact.