Shortly after 5 p.m. on Friday, Maryland State Police Helicopter Trooper 5, based at Cumberland Airport, was dispatched to perform an aerial hoist rescue of a victim who sustained a head injury after slipping on a rock. Due to the steep terrain, extended extraction time, and the nature of the victim’s injuries, a Maryland State Police Aviation Command helicopter was requested by SYSCOM through Garret County Fire and Rescue to perform an aerial hoist rescue.

The Trooper 5 helicopter crew launched and once on scene, configured for an aerial hoist rescue while the pilots maneuvered the AW-139 helicopter into a steady 275-foot hover position above the river. Garrett County Fire and Rescue personnel provided patient care during the ground operations and assisted in preparing the patient.

The Trooper/Rescue Technician with medical equipment was lowered down to the scene to assess and prepare the patient for an aerial extraction using a Patient Extrication Platform (PEP) bag. The patient accompanied by the Trooper/Rescue Technician was hoisted up to the helicopter. Once the patient was secured inside the aircraft, Trooper 5 transitioned to its medevac role and provided advanced level medical care while enroute to J.W. Ruby Memorial Hospital Morgantown, WV.

The Maryland State Police Aviation Command has served Maryland citizens since 1970, and operates a fleet of ten helicopters from seven bases throughout Maryland on a 24/7/365 basis. Missions include medevac, law enforcement, search and rescue, homeland security, and disaster assessment. The success of rescues performed by the Aviation Command depends a great deal on the cooperative effort of local fire, rescue, EMS and law enforcement. 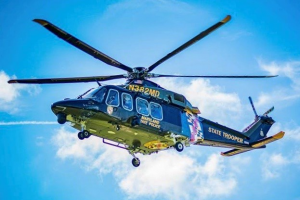